Below is a quick look at the leadership team that makes up the Redbird Advisors Network.  If you believe you would be a valuable asset to our team, we would love to hear from you! Drew Gurley is a co-founder of Redbird Advisors, serial entrepreneur, and avid writer (mostly insurance and financial services).  Drew is Redbird’s “Mr. Outside” with an emphasis on helping craft Redbird’s unique focus as an insurance marketing organization.

Prior to jumping into financial services, Drew was an operations manager for a private equity firm in Vail, Colorado focused on high-end resort development projects.  Drew also spent seven years as a firefighter for one of the largest fire departments in the state of Missouri.  Drew currently holds a role as student mentor for students in the Trulaske School of Business at the University of Missouri-Columbia.  Aside from spending time with his beautiful wife and 3 children, Drew is a member of the Forbes Finance Council and YEC, an invitation-only organization comprised of the world’s most successful entrepreneurs 40 and younger.

Drew has a degree in agricultural economics from the University of Missouri-Columbia. Todd Gurley is a co-founder of Redbird Advisors and serial entrepreneur in multiple industries.  Todd has crafted Redbird’s unique positioning as a resource to help medium to large insurance agencies looking to grow outside their traditional footprint.

Prior to Redbird, Todd was a management consultant to Fortune 50 clients for more than 20 years in the areas of customer strategy and experience, brand strategy and positioning, marketing, market research and new product and service development.  His clients included Lowe’s, Toyota, IBM, and General Electric.  Todd spent more than 15 years in corporate America for IBM and AT&T.

Todd has a degree in journalism from Arkansas State University. Jeff Pitta has established himself as one of the up-and-coming players in healthcare field as the CEO of Healthcare Holdings of America in Nashville, Tennessee.  Jeff embraces change with an unparalleled passion and looks beyond the normal—the standard—and says there is a better way; not for the sake of change itself, but to leapfrog stagnant models and find new formulas for success.

While sales development is clearly Jeff’s strong suite, redesigning and reengineering the playing field will be his legacy as he continues to launch disruptive technologies and platforms with health plans and provider networks. Jeff is already a seasoned veteran of production in Medicare and Long-Term Care.  One of Jeff’s biggest achievements was winning the prestigious Inc. 5,000 award and has made the list 7 years in a row.  Jeff is a member of the Young Entrepreneur’s Council and Forbes Finance Council along with Drew Gurley and Scott Karstens.

Jeff is a graduate of the University of Tennessee and holds a Bachelor of Science in Business Administration. Jeff is married to Julie Pitta and is the adoring father of three precious children. 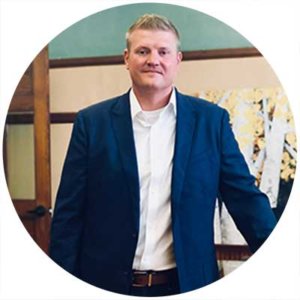 Scott Karstens is a co-owner of NFG Brokerage, Founder of Broker Back Office, and passionate about the insurance industry.  Scott is NFG Brokerages Insurance Expert  and leads the Life Insurance, Long Term Care, and Disability Divisions.  He is a wealth of knowledge and as a producer was able to successfully sell more than $1 million annually through his property and casualty agency prior to joining NFG as a partner.

Scott’s passion for the industry provides agency owners an agents with growth strategies and comprehensive insurance solutions for their clients throughout the US.  Some of the unique target markets Scott is involved in include; Business Planning, Executive Recruiting and Retention Strategies, Estate Planning, and Advanced Individual Planning Strategies.

Scott started in the Insurance Industry more than 17 yrs ago, starting a scratch P&C agency and after great success, became a Sales Trainer teaching other similar agencies how to position their operation for success.  After several years of success, Scott moved into the Financial Services Industry where he worked with both Middle America and High Net Worth clientele as a Financial Advisor.

Scott enjoys spending time with his wife and three children.  Scott is also a member of the Forbes Finance Council with Drew Gurley. Rafael Cordero is the eyes and ears for international health insurance products for the Redbird Independent Agent Network.  He started his own firm, Alliance International Advisors in 2007 and oversees the firms’ international markets strategy and management.

He currently runs his agency out of Miami, FL (known as the Capital of Latin America and the Caribbean) and actively in touch with the best international health insurance companies.

Rafael has extensive experience in cross selling with investment banks, family offices and finance professionals, as well as years of coaching agents and insurance entrepreneurs in Latin America. He brings a very targeted set of skills to the Redbird network and had been influential in growing Redbird’s international foot print.

Rafael, a native of Venezuela himself, studied economics and holds a Master Degree in Finance.  He is married to his beautiful wife, Diana and currently living in sunny Miami, FL. Nate is an internet pioneer, having spent 17 years being involved in many highly-successful businesses, primarily in the financial services sector.  Today, Nate is a partner in the venture capital firm Plus2 Capital.

Nate is a three-time Inc. 500 winner with four successful exits.  He was the chief marketing officer for VeteransUnited.com, the leading VA lender in the U.S.  Nate was a partner in SuretyBonds.com, a firm which developed technology to qualify, quote and bind thousands of surety bonds.  Nate also founded eligibility.com and is now involved in multiple venture capital backed startups in the bio-tech and insure tech fields.

Nate lives in Mission Hills, California with his wife Kristi and two sons. Bret Colson is a public relations professional and journalist with more than 30 years of diverse experience.

Prior to joining the Redbird team, he was the public information manager for the City of Anaheim for more than a decade.  During that time, he worked with staff, elected officials, high-profile CEOs, and businesses in the community to deliver critical messages and information to several audiences.

Bret also served as the managing editor of Anaheim Magazine, and engaged in crisis communications including duties as a liaison with police and fire agencies during public safety emergencies.

As part of his efforts, he also interacted daily with local, regional, and international media during the $5 billion makeovers of the Anaheim Resort and the Disneyland Resort.

Bret has worked with the team for nearly 5 years on a variety of projects focused around agency development, consumer lead generation, client education, and recruiting.  Bret leads the content writing team that supports the various clients in the Redbird network.

How to Become a Financial Advisor: The Complete Guide in 2021

Ultimate Guide to Selling Medicare in 2021

8 Insurance Agent Resources You Should Know About in [2021]